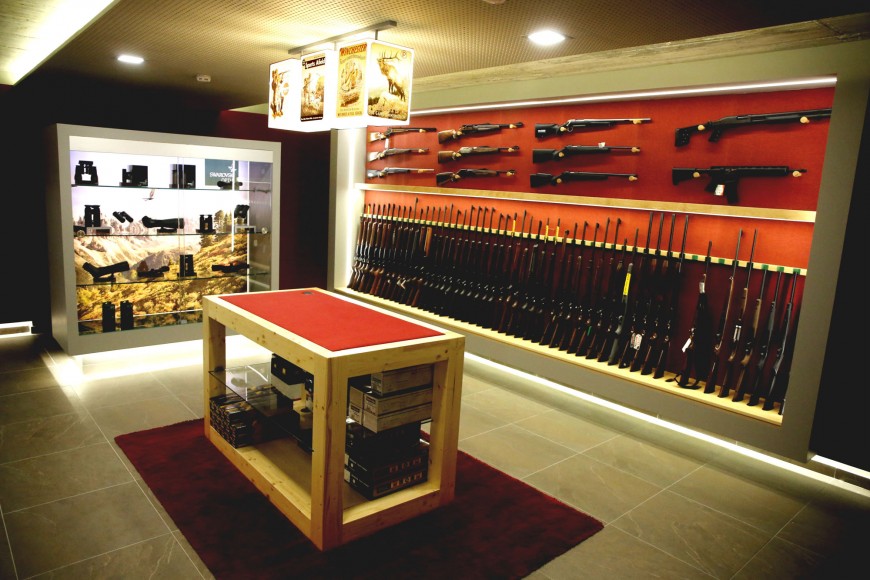 Aitana Castaño, journalist.
Trelles and reinvention
The "Lavianesa" gunshop, with more than six decades of activity, inaugurates a new space in the Fruela Street of Pola de la Viana.
"There are things that a man should only prove to himself and not the rest" is said in the Western "Big Country" (in Spain translated as "horizons of grandeur", and nobody in the Trelles family may be Gregory Peck but the eagerness of all to reinvent themselves, adapt to the new times and continue working after more than 110 years of existence in Pola de Viana corroborates that the first (perhaps the only) to those who want Proving something is themselves. Six decades ago, in one of these reinventions, the surname Trelles happened to inevitably bind and forever to arms, hunting and the mountain. Now, the Armory Trelles is born again in a new location, new spaces and the same commercial philosophy: "Give solutions and the best products to our customers".
The most important transformation of the establishment in this new area is the place. From its traditional locales on Calle Libertad de la Pola have passed, there are since the beginning of November, to a new space in the street Fruela (in front of the morgue Lavianés). The shape is modified to improve the background, a background that sits on three fundamental legs: the armoury, the Mountain section and the toy store. In the three sections have been and remain as one of the commercial references of the country.
A decade ago the idea of entering into the 21st century modernity was the head of Alfredo Trelles Cuetos, son of Moses Trelles and Maria Paz Cuetos, and maximum exponent of the fourth generation of the family after the counter of these entrepreneurs Lavianeses. And a year ago that idea began to be a reality on Fruela Street. Trelles and his team have adapted the new premises to the needs of the clientele and have provided a plus of quality, welfare and innovation that were already flagged when they started, before many, with the sale on-line of their products in armeriatrelles.com.
The shop, which reminds of the Nordic countries ' mountain shops and armory for their wood finishes and décor, it is now presented as a space to travel, buy and enjoy with play area for the little ones, cafeteria, workshop of armoury and two vaults and safe, the two hearts in which throb the most precious of the establishment : Guns.
A lover of the hunt can enter through the door of the armory trelles with the desire and go out with the best equipment of the moment. The guilt? The presence between the walls of the shop of the best marks of the moment.
In the armory space, the customer can be found with products from Remington Arms, Winchester, Browning, Walther, Davide Pedersoli, Pietta, Armi Chiappa, Sierra, Lee Precision, Ardesa ...
The mountain brands found in Trelles are not going to lag behind weapons and accessories. In the local shelves there are products of Trango, Aigle, Columbia, North Face, Meindl, Salomon, Bestard or dolomite ... among many others.
Armoury and accessories, clothing and footwear, electronics and communication, for hunting, for the mountain, for the snow or for the street, everything is in the walk on the two floors of the premises of the street Fruela, with a customer service of a group of veteran vendors and also committed and knowledgeable of the terrain they tread on them and the different land that the customers tread.
And among the "extras" that make this small shopping center the place of reference that is, highlight the service/workshop of arms or training courses that are taught in topics such as recharge of cartridges.
The royal store is enjoyed as a walk and also the virtual shop. Since 1998, Armeriatrelles.com has been one of the pioneering on-line businesses in this country. The Web page turns this corner of the Pola's surname Trelles into a provider of customers all over the world as well as it sounds. Customers who in some cases even approach the Viana, from all over Spain, Europe and even North America and Southamerica; Because as Eli Wallach, the ugly of "The Good, the ugly and the bad": "It is good to know that somewhere in the world, rain or thunder, there is a dish of soup waiting for You". And who says soup plate ...
More than 600 square meters of facilities at your service.
More than 1,000 guns in existence.
Repair shop, two armoured chambers, lounge for customer reception, cafeteria ...
Don't let them tell you ... come and visit us! We will be delighted to assist you.
jun 8, 2016 News 2 Comments